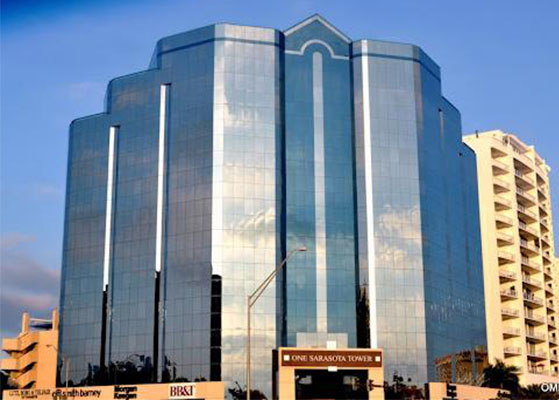 Hill York Service Company's three-phase approach for ICORR Properties International’s (ICORR) One Sarasota Tower has been featured in local and national publications as an outstanding example of co-authored energy solutions. Our work on this project contributed to self-funding the program in only 2.2 years.

At the completion of all three phases, One Sarasota Tower reduced its overall energy consumption by an annual average of over 34 percent and earned EPA ENERGY STAR® certification. This signifies the building performs in the top 25 percent of similar facilities nationwide for energy efficiency.

The decrease in greenhouse gas emissions that we helped achieve is equivalent to removing 181 passenger vehicles from Sarasota roads each year. The project is projected to generate one million dollars in positive cash flow over the equipment’s lifecycle, thanks in part to our ongoing enhancements.

One Sarasota Tower needed major infrastructure upgrades as the building’s mechanical systems were at the end of their useful lives and were highly inefficient. ICORR wanted to increase energy efficiency and tenant comfort, reduce operating costs, and create a savings stream that would help fund future capital improvement projects.

To help achieve ICORR’s objectives, we implemented a three-phase plan that began with advanced building controls and evolved over a two-year period to include the design and installation of state-of-the-art, premium chilled water systems.

The final phase included a complete retrofit of the building VAV controls to integrate air handlers and chillers through a common controls platform. End users can log in to the program from anywhere in the world, and we can access the system to continue identifying means of reducing energy costs, troubleshoot system failures, and help minimize downtime.

Built in 1988, ICORR’s One Sarasota Tower is an iconic landmark of Sarasota’s downtown skyline.