We spearheaded an energy savings program to help save more than $154,000 a year in energy costs. 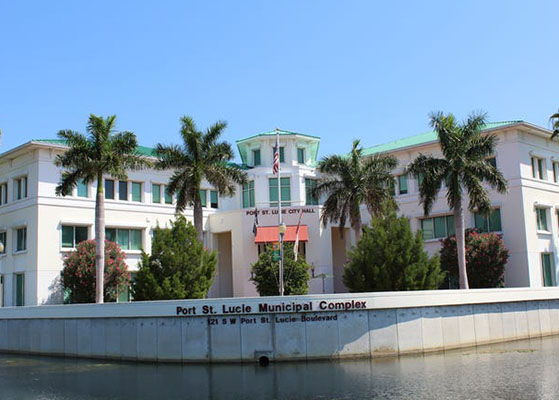 Our design-built central energy plant at the City’s municipal complex incorporated the most efficient chillers on the market, using frictionless magnetic bearing technology. The energy savings associated with the design enabled the City to replace several inefficient units that were at the end of their useful lives.

Also, our cost-saving HVAC solutions transformed grossly inefficient ventilation systems that ran at full capacity to ones that greatly reduced building cooling loads and energy use during ramp-down times.

In addition to energy savings, the City will realize an average annual operations and maintenance savings of approximately $39,000 from the life expectancy and durability of the new equipment. Capping off this self-funding project, the upfront costs of the comprehensive improvements were further offset by rebates from Florida Power & Light.

Like many municipalities across the country, the City of Port St. Lucie faced the challenge of improving the infrastructure of an aging building portfolio with fixed or shrinking financial resources. City officials were seeking significant long-term energy savings as a funding vehicle for the improvements.

The challenge was to achieve the lowest life cycle operating costs with a limited upfront capital budget.

After completing efficiency assessments on chillers at three City facilities (City Hall, the Public Works building, and the Police Department headquarters) we began a series of critical upgrades to slash existing operating expenses and return cash to their budget.

Considered the heart of the $7.1 million project, we designed and built a centralized chilled water plant that used premium efficiency chillers. Beyond the central energy plant, we implemented additional projects throughout the City to further reduce operating expenses.

We installed premium-efficiency HVAC systems in four City buildings. We also installed demand-based kitchen hood ventilation systems at the City golf course and civic center. The systems were designed to monitor cooking activity and control system operation according to need.